Hey all-  Larry’s on his way home for dinner–listening to a books on tape, I’ll bet, for his long commute.  And what’s for dinner?  Well, I pretty much scavenged around the kitchen to see what I could team up with some leftover ham, just waiting to be eaten.  A bit of cheddar, a chunk of brie, and pasta–always in the cupboard (like at your house).  And some asparagus to freshen it up a bit.  I thought of calling it “Clean out the fridge Macn’n’cheese”, but that sounded less than appealing.  It’s in the oven and the pre-dinner sampling was delicious. 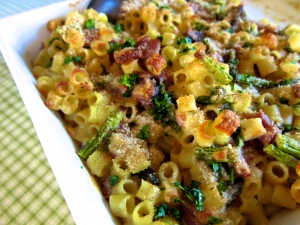 Cook the pasta according to the package directions.  Drain well.  Cook the asparagus in the microwave just 2 to 5 minutes (depending on how thick the stalks are)  in a dish of water sprinkled with garlic salt–until it is edible but still crispy.  Then in a nonstick pan, melt the butter, stir in the flour until it is a begins to bubble.  Slowly add the milk, stirring as you go.  When it’s all mixed and begins to thicken (about 5 minutes), stir in the cheddar and brie.  Then mix in the macaroni, ham and asparagus. and turn it all into a 2 quart baking dish that’s been sprayed with cooking spray.  Sprinkle on the bread crumbs and pop it into a 400 degree over for just 10 to 15 minutes until the top is golden and the sauce begins to bubble around the edges.

There. Dinner and cleaning out the fridge all at once.  Two birds with one stone.  With an apple almond salad and some crunchy bread it was a fine meal when Larry made it home.

One thought on “Brie and Cheddar Mac-n-Cheese”

This site uses Akismet to reduce spam. Learn how your comment data is processed.