Bonjour!  Just finished reading On Rue Tatin, Susan Loomis’ story of her family’s move to a town in Normandy, where they renovated a 12th century Convent to make their home and immersed themselves in the luxury of French cooking.  The book is studded with recipes.  Here is her favorite chocolate cake!  It’s sort of a cross between a brownie and a chocolate souffle!

Melt the chocolate in a large microwave proof mixing bowl– about 90 seconds.  Stir until smooth.  If the chocolate still has lumps, microwave it 10 seconds more and stir again.  Then immediately stir in the butter so it will melt with the warm chocolate.

When that is all blended, whisk in 1 cup of sugar (minus 1 tablespoon of sugar saved for later).  Next mix in the flour and 1/4 teaspoon of  salt until it is all combined.

Separate the eggs, putting the yolks into the bowl with the chocolate mixture and the whites into another clean mixing bowl.  Stir in the egg yolks.  And then whisk the eggs white along with the tablespoon of sugar and pinch of salt– until the egg whites are glossy and soft peaks form.  (The whisk attachment on my hand mixer worked well, took a little over 4 minutes)

Fold he egg whites into the chocolate cake batter until it is thoroughly blended and then spoon it into a 9″ cake pan that has been sprayed with cooking spray.

Bake it up at 375 degrees for 30 to 35 minutes until the cake is firm to the touch and  sharp knife inserted comes out clean.

Let the cake cool to lukewarm and then shift powdered sugar over the top of the cake.  So good warm with a bit of ice cream! 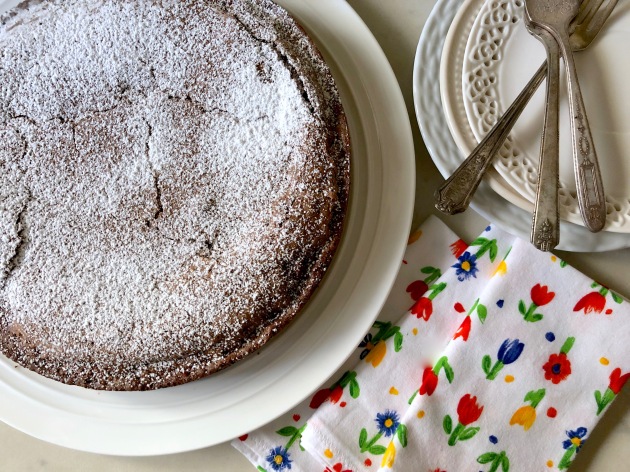 Susan Loomis sort of has my dream life– She moved to Paris as a young woman and attended La Varenne École de Cuisine, a cooking school for Americans.  She found friends and small shops with tempting foods all over the city.  Later when she returned home she met, loved and married a sculptor, Michael Loomis and eventually the two found their way back to France where they purchased an ancient convent building in Louviers, a charming town in Normandy.  It took a long a grueling renovation to make the place a home for them and their small son.  But through the years they encountered a large circle of people, from the surly priest next door to warm shop keepers, farmers at the market, the florist sisters across the street and many others who became close friends. I was totally charmed by the book, wanted to write to Susan and ask if I could drop in and stay for the summer!  If you like glorious food, beautiful countryside, and wandering cobbled streets, I think you’d like this book as much as I have.

P.S. Each chapter includes recipes from the author, including a version of this cake!

52 thoughts on “French Chocolate Cake and a Good Book!”

This site uses Akismet to reduce spam. Learn how your comment data is processed.